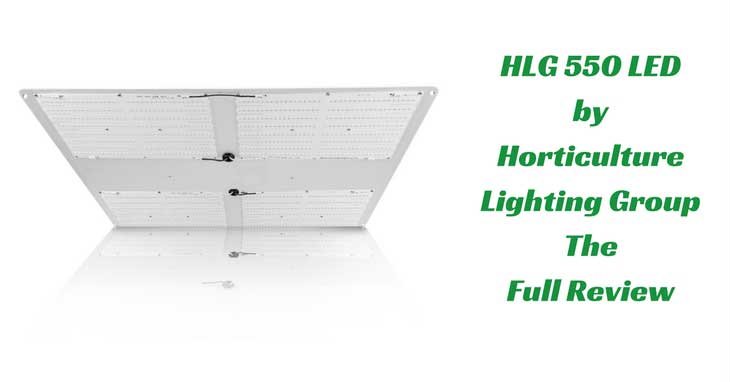 A new era in LED grow lights has arrived.

The HLG 550 LED grow light from Horticulture Lighting Group is breaking away from old LED fixtures with blue and purple lights.

HLG decided to build their own LED boards to utilize a white light technology with a full-color spectrum.

The grow light uses more green and yellow light (invisible to the eye) to enhance photosynthesis accompanied by all the other color spectrum’s.

More and more LED fixtures on the market are using the white light technology.

In this HLG 550 review, we will take a look at the guts of the light, go over the parts included in this fixture.

Also, what features it has and how it compares it to other alternatives of LED grow lights out there in the industry.

Find out more below. 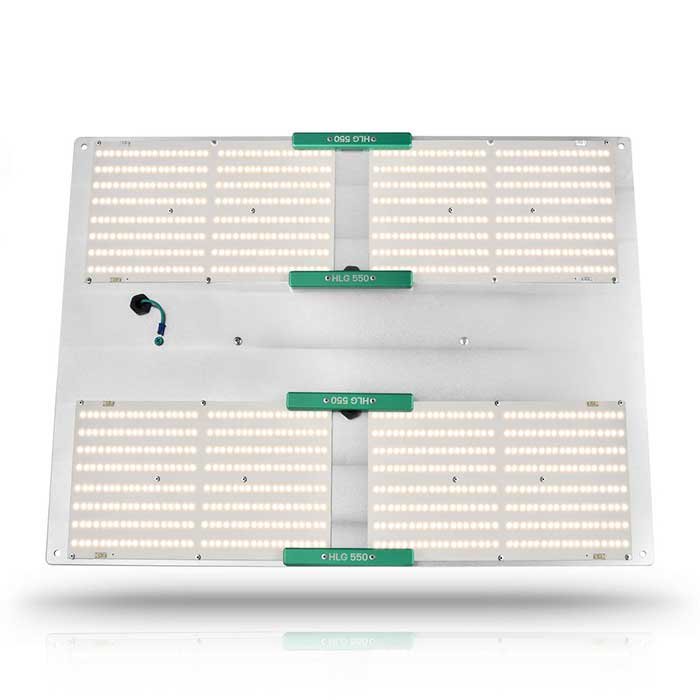 Recommend for growers who would like to transition from using the HPS or MH bulbs.

Make a move to a more energy efficient way to grow with new LED or COBS which are also on the market.

Grower’s with an older LED grow lights and are not satisfied with the quality your bud.

Or are alarmed at how much your electricity bill is and are considering going back to HPS or metal halide.

You are starting to grow and are concern over bulbs exploding or fire caused by heat especially in a tent.

Or just want to save money on power and grow some killer weed.

Check out the HLG 550 today on Amazon!

What does this mean for you the cannabis grower? Grow healthy plants, with better trichome production and yields than your average cheap LED’s that are currently overwhelming the growing community.

There’s nothing wrong with these lights they do grow some alright weed.

Except for the energy efficiency from the wall and the amount of light photons produced doesn’t compare to the HLG 550.

You could realistically get a cheap HPS or Metal Halide also to replace your inexpensive LED and get the same watts from the wall and have better quality herb.

Save money on cooling when you’re growing, this light is passively cooled with no additional fans.

There is heat but nothing compared to a 1000 watt in the summer.

The power is less than half of a 1000-watt HPS or even Metal halide bulb if you’re using one. 515 watts. Sweet.This light is bright you will want to wear some grow glasses when you power it on!

The HLG 550 is currently one of the most efficient led grow lights on the market currently coming in at 2.4 umole/joule.

Some of the most efficient led right now are at an efficiency of 2 umole/joule.

I have been wanting to grow with the HLG 550 for some time.

So I finally bit the bullet and bought one.

When going from an HPS bulb to the LED it was quite a change.

There were some bumps along the way, but I got them worked out.

Some of them were self-induced like deciding to grow 6 different strains.

The others were more about getting used to how the to grow with the light and the environmental factors and nutrient requirements.

With the HLG 550 V2 I have completed a full grow with it, here is the LED from my view when using it for the first time.

Here is a list of the strains grown for the first time under the HLG 550 V2:

I started all all strains from seed. it didn’t take long to germinate and once germinated they’re placed in half inch rockwool cubes to sprout.

After they sprouted they are placed in 3 inch rockwool cubes been transplanted into 3 gallon pots with straight Coco coir.

The HLG 550 light was on full blast at the top of my 4 X 4 grow tent when the seedlings we’re in their first week.

The growth was pretty decent for the seedlings on their second week as well. I did notice some leaf curling, so lowered the light and turned down the power by half.

At 4 weeks I turned it up full blast and raised the light, this appeared to helped them get some faster growth.

After about 4 weeks notice some cal mag deficiency on some lower leave and also interveinal yellowing, so definitely low on magnesium.

I added more cal mag to 3 ml per gallon, and also added ¾ teaspoon epsom salt per gallon.
( This is due to my water source. Using de-chlorinated tap water for the grow. RO water for flush )

We had to get the deficiency on order before going into flower.

Because I wanted to maximize my yield so we had to extend the veg cycle another an extra couple weeks until the plants bounce back.

After getting the deficiency straightened out the plants you’re starting to thrive. Then switched to flower stage so they can start to stretch.

We had to raise some plants up due to the fact that we are growing all different strains and each one of them was at a different height.

Placed the plants on milk crates to elevate them up because we had some beasts in the back.

The first couple weeks had amazing stretch and growth happen.

The bud development was nice and solid.

At 6 weeks of flower the buds were nice and stacking really good all strains seem to be liking the light.

Leading up to the 9th week I did not have any yo-yos to hold up the buds and I failed to put in a scrog net or two to give them support.

I was supplementing with silica but that didn’t seem to help as all the colas were massive and some were falling all over the place.

I had to MacGyver some colas with any means necessary.
The buds were nice a tight, and stacked up nicely

When you’re growing multiple different strains some finish earlier than others so I started taking some of them down after 9 weeks.

We were flushing the plants to try and get them down to 0 PPM All plants we got down below a hundred and most around 0 PPM.

And now onto the final tally

The stuff I was not expecting was how much cooler my tent was, or the additional cal mag and epsom salt I had to add to the nutes.

This grow is done during the summer months and the temperature was pretty steady between 75 and 80 degrees Fahrenheit.

When growing in the winter I noticed I needed a small heater to be used to draw some hotter air into the tent from the outside.

Because having a small heater in a 4 by 4 grow tent is a little tricky and this way the plants do not dry out as fast.

I also had to use extra cal mag and additional Epsom salts when growing under the HLG 550 V2, things to keep a note of on your next group with this light.

Overall I have to say I love this light and that it’s converted me from regular bulb use to be an LED believer now.

I was rather impressed with the yield as well in my harvest and found a comparable to an HPS yield.

We also found the buds were a lot tighter possibly due to lack of heat has been growing the bulbs.

I’ve already recommended this light two other growers I know, it may cost a little bit more at the start but overall it will pay off in the end.

Horticulture Culture Lighting Group is at the forefront of the LED industry.

They are leading the way with a new efficiency in LED lights.

Moving away from the older generation of LED of purple, blue lights and created the Quantum Board. Quantum boards are custom designed by Horticulture Lighting Group they purchase the led’s right from the Samsung factory.

Samsung LED diodes are assembled on the boards in the United States.

The boards have different model coinciding with the number of diodes on the boards.

The quantum boards are like a giant COB because both lights use a newer white light technology, which utilizes the green, yellow color spectrum.

Quantum boards is passively cooled. Unlike a cob which requires a means of cooling itself.

Mean well Drivers are a top of the line driver (power supply) which is the same as what a ballast is if you are growing with HPS or Metal Halide.

This is cool if you want to turn down the power and not use the full 480 watts from the wall. 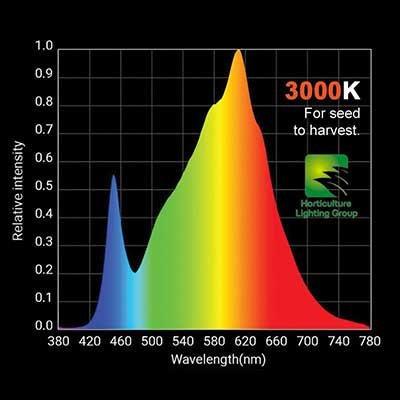 Full Spectrum white light 3000K this spectrum is the happy medium in growing because your cannabis plants will do well in the veg or flower stage.

Passively cooled fixture design (no fans required) this is a bonus because the heat is dissipated over the whole boards and the mounting frame.

Optimal canopy spread of light, with the way the HLG 550 is designed you get a great stretch of even light photons across the whole canopy.

Bonus Dim-able feature which is great if you’re in veg and would like to lower the watts say down to 250 watts or so.

When just starting plants out under the light you can turn down the start and then crank it back up to 510 watts slowly.

Made with 1152 top bin, Samsung 301B led, so top bin means the top of the line, the best of the best straight from the factory.

Only uses 480 watts from the wall, this is incredible, imagine saving half of the cost of your electricity bill.

Flowering footprint is 4.5’X4.5 or 4’X5’; this light is great for tents or sections of your grow room

Veg footprint is 6’X6′, enough room to provide some spread to your growing plants

Tech Specs of the HLG550

Here is a listing of the light values for more scientific measurements for comparability.

Bold claims for sure, but if you look at the data (science) for the PPF of light.

HLG 550 has comparable par readings to some single ended bulbs.

Here are some of the par readings to compare with a single-ended HPS(include pics and maybe table stats?) 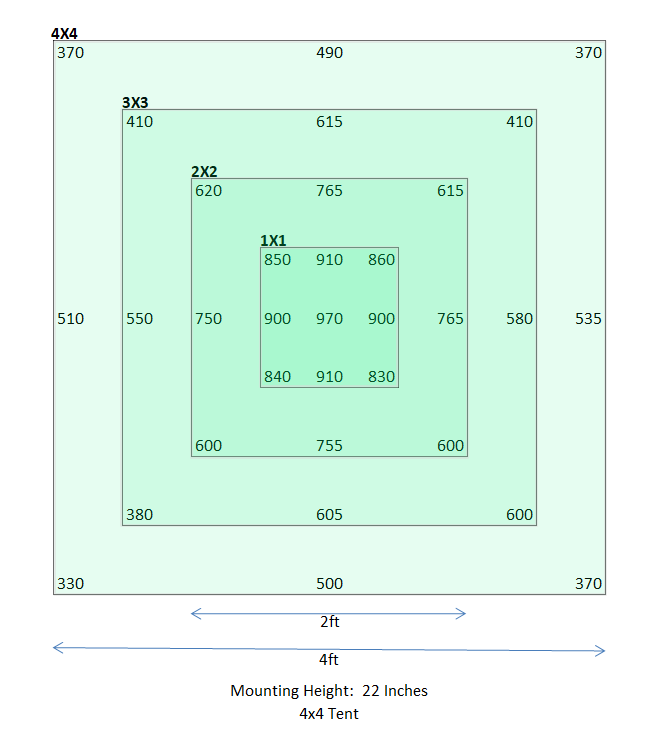 As you can see at the recommended height of 22 inches the 550 outpaces the HPS, at their recommended distance of 24 inches. 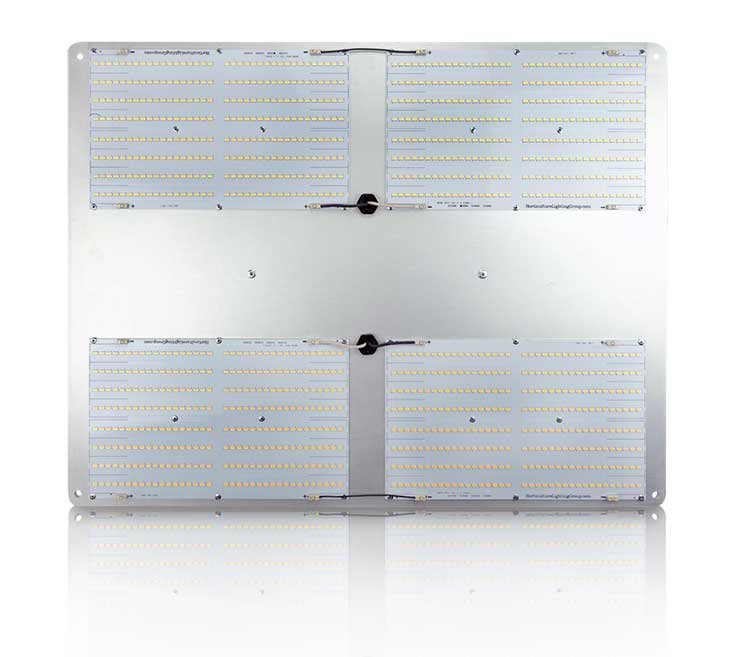 When looking for a LED grow light out there if you’re growing with anything lower than a 1000-watt single ended bulb.

The HLG 550 grow light will blow anything else away.

For quality and quantity of bud it comes up pretty even with a 1000 watt.

It may be a little investment at the start, in the long run, you’ll save on power after the first or second grows.

When I use a bulb, it’s pretty inexpensive just to replace it, but the electricity bills start to add up.

These lights are just like TV’s with their lifespan, over fifty thousand hours.

Something to consider with looking into purchasing a LED.

Have you used the HLG 550, what were your experiences?

Are you considering making the change from grow bulbs to led lights?

Let me know in the comments

Grow on my friends.