When you fim or top cannabis plants these technique can be the best way to increase your overall yield at harvest time.

If you want lots of budding sites and colas with your cannabis plants, the best way to do that is with a few different ways described below.

Fim vs Topping?  Each have their benefit and is preferred by growers for maximum yield.

One way completely removes the main branch to grow many branches,  referred by topping cannabis plants.

While the other looks to maintain the main branch and grow multiple main branches, The FIM or fimming method.

Each way can help and you can also fim and top the same plant, for different results.

You will find all the information you need to help you increase your yield and also understand the benefits of doing these various techniques.

So you can grow bushes and trees instead of a Charlie Brown Christmas tree.

You may be wondering how many nodes before topping or fimming see the warning below:

Warning: Make sure you have at least 3- 5 nodes on the plant before proceeding in the fim or top technique.

I prefer at least 4 nodes before i start so not to shock or stunt the growth of the marijuana plant.

Never Fim or Top you plants in the flower stage.

Now let’s get right into it, 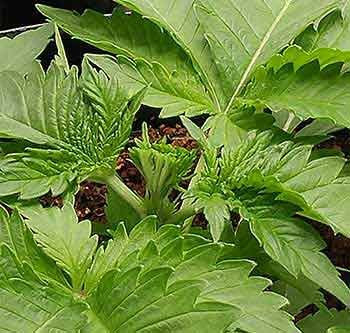 You may be wondering what FIM stands for the acronym is called:

This technique was discovered a long time ago when a farmer who wanted to top some of their marijuana plants was lazy and cut only part of the main branches top leaf structure and not taking the whole “top” off.

Then the next day the farmer went to check on the plants and noticed his mistake and said ……..    (This is not the exact origin story)

By only taking part of the top off, you stop the growth on the main top temporarily.

This then triggers other branches lower to start to push upwards.

The new growth is from the hormone called Auxin in cannabis plants and it signals a threat and to start to grow more main branches to recover.

The time for a plant to recovery from fimming depends on the plants usually after a couple days the plant bounces back.

Also a benefit from a fim is that it can produce either 2- 4 new additional branches to appear. More branches mean more buds.

How many times can you fim a plant? You can fim a plant a lot on some of the new leaf tips that appear on your new branch structures.

You can also fim the side branches.

How to fim your cannabis plants:

Some people use either their fingers or trimmers or sharp scissors.

It’s the same principle when using any method.

Take the tip of the leaves by the top of the plant the main shoot or branch.

You should be able to see where the leaves are forming and see the part connected to the leaf. 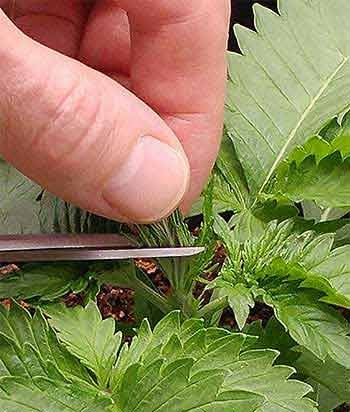 Then you want to cut above the bottom leaf stem

About 80 percent from the top of the leaves to the bottom.

Leave about 20 percent on the bottom of the plant.

It will usually clump together just spread it apart a bit if you would like
that is about it.

This method will not always guaranteed to get 4 new branch nodes out of this but it may happen either way you fucking missed.

What is the recovery time of fimming your cannabis plants?

The recovery time of fimming is usually within 3 days, new leaves should start to grow.

If you need a pair of bud trimmers or scissors designed for cannabis check out the review post. If you’re looking to try the traditional topping technique, this will in fact take the main branch out of the picture for your plant.

It will usually generate two or four main colas and force the surrounding branches to become main branches.

From there it opens the plant up to more light and possible bigger buds and other molding techniques.

It’s best to top after the plant has some growth at least after 5-6 nodes on the plant.

To ensure the other branches have grown in to then become main branches.

This is really simple to do you can either use trimmers or scissors to just cut the top part of the main branch off.

BAM done nothing there now.

The plants hormones will kick in and in a couple days.

Then the surrounding branches will start to grow bigger, leaving the middle to heal and seal off its wound.

The plant will take longer to recover than when you fim. This is because you are taking the main artery for the plant essentially.

After a three to five days you can now start molding the other branches.

Such as super cropping or LST method that forms the branches wide around the outside of the pot your using or bend them to your will.

It can form some strange looking plants and also some with massive colas.

Some grower prefer this technique, I personally don’t do this kind of topping because I prefer the main cola most of the time.

That being said please try it out on a marijuana plant of your choice to see if you actually like this way of growing. 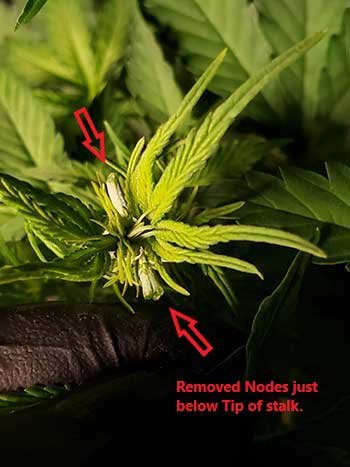 This is one of my favorite ways to increase the plants budding sections, or branches on a plant.

I like to think of it as nature’s way to make a cannabis plant bushier with more main colas.

What this could mimic is in nature when and animal decides to chew on a nice fresh smelling marijuana plant it may eat the top part of the leaves, and not touch some of the older ones located lower on the plant.

He also has his own site that does live weekly shows on ZOOM.

The shows are pretty cool and can get your questions answered and they talk about some cool shit on growing and have an amazing panel of guests.

Remove leaves close to the top of the plant, and also around the main stalk.

The lower branches will then start to build up and grow up to the point of where the other branches/leaves where missing.

This will create more budding branches.

The term putting on ice is basically the plant will stop growing on the newly removed leaves.

Then the lower branches with the hormone Auxin will start then moving upwards.

This creates the bushy plant as it will also produce a even canopy which is what you want when growing for maximum light being available to the plant.

How to put your cannabis plants on ICE:

Best to start the technique after about six to seven nodes on plant,

Start by removing the two main nodes before the tip of the stalk, be careful no to remove the tip this will top the plant. Grab part of the stem you would like to remove 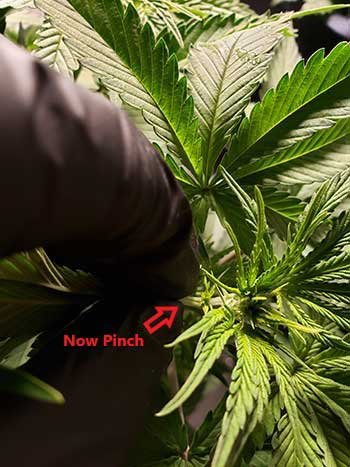 Now Pinch the stem off close to the stalk 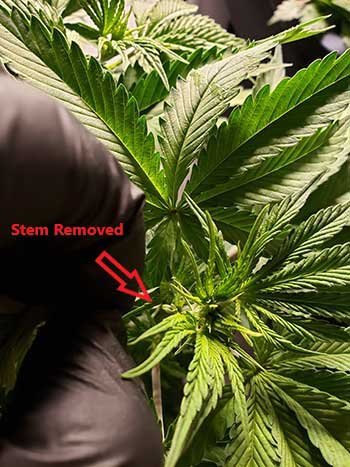 The lower branches should start to work their way up in the next couple of days.

You can also remove bigger leaves late on.

If there are taller branches remove some leaves to bring up the lower ones or some hidden from the light.

It will take some practice but you will see the results in a couple days and adjust accordingly.

Also it will start to be a daily chore to keep the canopy even. It becomes a competition between the stems.

The main benefits of topping or fiming your marijuana plants is that it will help produce more main colas on the plants.

You will also be able to control the canopy of your plants to keep it even for optimal growth.

More than if it was to just grow naturally.

By doing these techniques you kind of mimic nature in a way.

When animal chew on plants in the wild. You are able to mold the plant to your liking just like a bonsai tree.

The science behind fim and topping marijuana plants

I mentioned earlier about how the cannabis plant produces a hormone called Auxin.

When the plant undergoes stress with a branch or stem being removed.

If you want to read on we will go a bit deeper into the science of it.

When the hormone is induced by trimming or cutting of stems it induces shoots apical dominance in the axillary buds.

Branches will start to grow towards the light. Also root growth is slowed to put more energy into the growth of the stems.

Auxin may also induce cell differentiation and regeneration of vascular tissues.
As per Wikipedia.

When fimming or topping cannabis plants this will definitely get you some bigger colas and possibly more if done correctly.

It does take some practice with theses methods and to see which one you would prefer to use.

I usually start of with the fim and then move to the ice method of topping.

This produces a lot of bud sections to my liking a keeps the canopy even for the most part.

What methods do you use?

Grow on my friends.